The fact that a colourful lifestyle doesn’t necessarily rule out cosy warmth and stylistic harmony was demonstrated by Riccardo last week with the living and dining area he designed with the aid of our interior designer Flavia. But what about the supreme furnishing challenge: the icing on the cake which turns a nice interior into a tasteful living experience through and through? We’re talking about those corners to which we pay as little attention as possible, because we just don’t know what to do with the restricted space that’s available there and swallows up our creativity like a black hole. Today, in the second part of our home story, “The Fabulous World of Ricci – at Home with Riccardo Simonetti”, we show you how our star blogger manages to turn an uninspiring corner into a star attraction.

We wake up as if from a reverie when the wood of the parquet floor in the 100 m² flat in an old building creaks under his feet. The multi-faceted cosmos into which Riccardo leads us on the tour through his home makes our thoughts range from Hollywood to outer space. For a movie fan the living area looks impressively down-to-earth and cosy, but without foregoing the flamboyant accents that make it so special. The cable of his laptop has made itself comfortable on the backrest of the couch. Next to it the remote control offers its services – you never know when it’ll be needed! Refreshingly authentic, Riccardo’s living room invites you to linger and dream. “I’ve been living out of a suitcase for years,” he says as he swings lightly into the mustard-yellow armchair in the corner of the living room. “That’s why it’s so important for me to create a haven of peace during the few days I’m home.”

Flanked by the gold and silver-coloured vinyl discs of his pop icons which Riccardo has mounted on the walls, the sophisticated Vegas armchair with its elegant appearance invites you to relax. The brass-coloured steel feet and the velvety gold of the fabric transport you to the glamorous Hollywood of the 1950s and 60s. As a complementary colour to the deep blue walls, the armchair rises from the seclusion of a corner existence and develops an attractive luminosity that is just right for those who like to reach for the stars and sometimes wonder what it would be like to live in Hollywood. The fact that Riccardo loves the spotlight is also reflected here: with a mixture of industrial charm and a film studio, the Metropolis standard lamp showcases armchairs and their occupants as if in a Tarantino movie. “I want my apartment to look as if it were a film set and make all its corners appear telegenic,”emphasises Riccardo, as he ponders with our furnishing expert about the look of his future home in Prenzlauer Berg before getting down to the concrete planning. To the sounds of a Lana Del Ray record, which he plays on a traditional record player – simply Hollywood in the golden age – we follow the dancing Riccardo to his next corner.

Most people know only too well how challenging the right design of corners is. Even the most experienced interior design aesthetes turn to our professionals with calls for help. Storage locations for waste paper which simply can’t make it to the container, the final resting place for stunted house plants or long-term storage facilities for jam-full removal boxes whose contents we don’t even want to guess at after such a long time, become cosy retreats and impressive design highlights. “Don’t leave any corners unfurnished” is the motto of the experts, but the right brilliant idea is often not easy to achieve without professional support. An empty corner creates a feeling of incompleteness and discomfort. And who wants to feel uncomfortable at home, surrounded by bare walls with the charm of a cold cathedral, when you can just as easily conjure up a cosy, stylish temple in the corners of your home? That’s when we talk about a “cosy corner” – or perhaps “crazy corner”, if you’re planning for a flamboyant dreamer like Riccardo.

In his hallway pop icons, a Jesus print and self-portrait à la Albrecht Dürer invite us to meditate. Here Riccardo has created a temple of inspiration that brings flora and fauna into his home. This colourful character finds his starring role in front of tropical wallpaper: in the jungle design of the Jungle Fever swivel chair modernity and functionality meet colourfulness and imagination. Wallpaper and room merge with a large indoor plant to create a virtuoso living environment. Wearing military boots, cargo pants and a bomber jacket, the fashion blogger jumps into the set and escapes into the world he prefers to dream of: the glamorous life of a film star. And that’s exactly what you’ll find out more about next week – in part three of our home story: ” The Fabulous World of Riccardo Simonetti”. 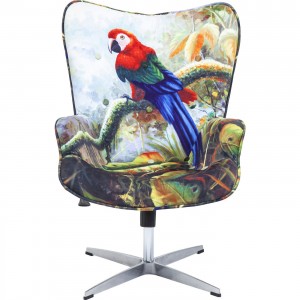 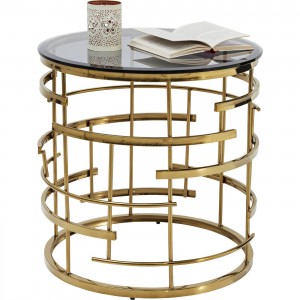 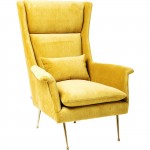