He’s an unconventional bird of paradise who is gaining an ever-growing crowd of fans and followers thanks to his flashy outfits and offbeat performances. With his blog “The Fabulous Life of Ricci“, in which he entertainingly and honestly documents his reveries and experiences, Riccardo Simonetti is now one of the most successful male bloggers in Germany. But the “hopeless dreamer”, as he describes himself, is far more than just a blogger and weaver of phantasies: he’s an author, model, actor, presenter – and now also a committed interior design enthusiast. With the aid of KARE, in his Berlin home Riccardo has dedicated himself to what he most enjoys doing: as he himself describes it, building his dream world. Our three-part ‘home story’ – “At Home with Riccardo Simonetti” – will enable you to decide for yourself whether the extravagant lifestyle displayed by his home represents an in-your-face and rather crazy world, or an imaginative dream castle.

With a skillful head movement he swings his mane of long curly hair to one side. His golden outfit gleams iridescently in the spotlight. In the background Hollywood towers over the room in the form of huge, brilliantly lit lettering. Welcome to the fabulous world of Riccardo Simonetti. You see immediately that he’s a great dreamer. Behind a plateau of illustrated David LaChapelle volumes on the coffee table, an astronaut statue strides across a silver platter, along a miniature version of the globe. At home in the world, resident in Berlin. Here the native of Bad Reichenhall has now dedicated himself to his furnishing dream. Just like his extravagant clothing style, his home is also intended to reflect his extraordinary personality: very offbeat, highly flamboyant. Colourful and crazy. Starlet and role model at the same time; glamorous and with his head in the clouds on the one hand, down to earth and authentic on the other.

“My outfits always consist of out-of-the-ordinary parts,” says the 25-year-old, who lived in Munich for a long time. “I’d like to transfer that to my furnishing style.” The fact that he chose articles of furniture from KARE to make his Berlin home a living space to match his personality is mainly due to their unmistakable character: “The furniture created by KARE looks just like my clothes: colourful, full of imagination, unconventional, never boring and just a little crazy.” The aim is for his apartment to create the effect of a movie set, and every little corner is to make an impact. Riccardo is tackling the fascinating world of furnishing with the support of our interior designer Flavia. In order to express his own wealth of different facets, the irregularity of natural beauty and the clean lines of steel create a striking contrast at the dining table, for example. Here the solid acacia wood creates originality and a natural atmosphere, which is offset by the modern form of the steel base. Colourful retro chairs create a break with the conventional. 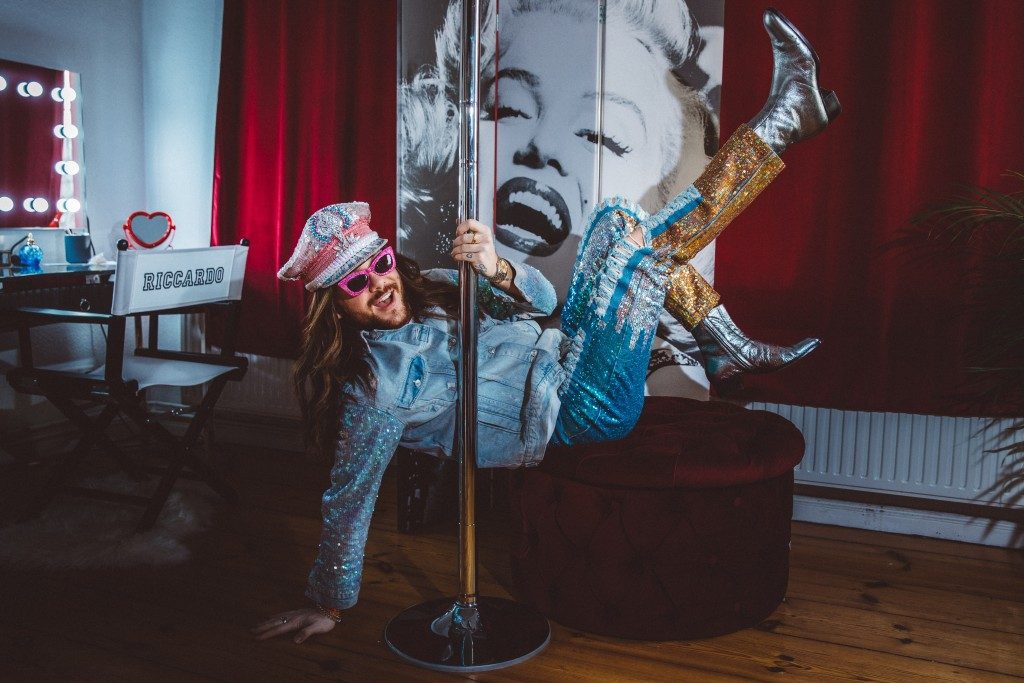 A clean interior in black and white simply wouldn’t be his style. “I think that kind of design is nice, but I’m just too chaotic. And that should also be reflected in my furniture!” The gaze then inevitably falls on the couch, whose grey is the last thing you would expect in the colour scheme of a cheerfully chaotic character, but which – with its spacious loft character – enhances the room with just the right amount of eccentricity. With modern elegance, gently nestled on a richly coloured, soft carpet that picks up on the retro design of the chairs in the dining area, the round coffee table with its golden stainless steel frame celebrates the kind of glamorous appearance which the Hollywood lettering on the wall promised us at the beginning and which is rounded off here. We let the overall picture work on us a bit more and finally, curious and almost in a kind of reverie of our own, we turn to the next scene created by our furnishing dreamer, which already await us around the next corner. You’ll learn what this looks like next week – in part two of the fabulous (furnishing) world of Riccardo Simonetti.